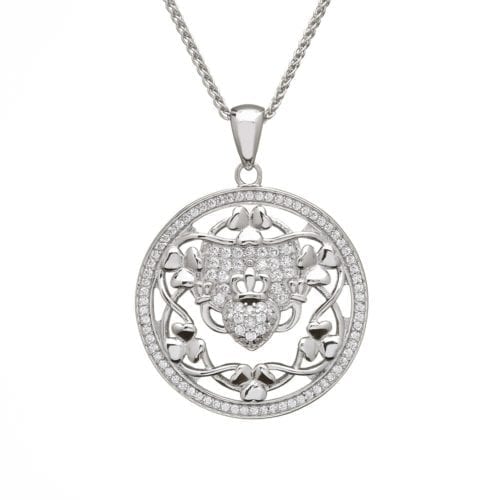 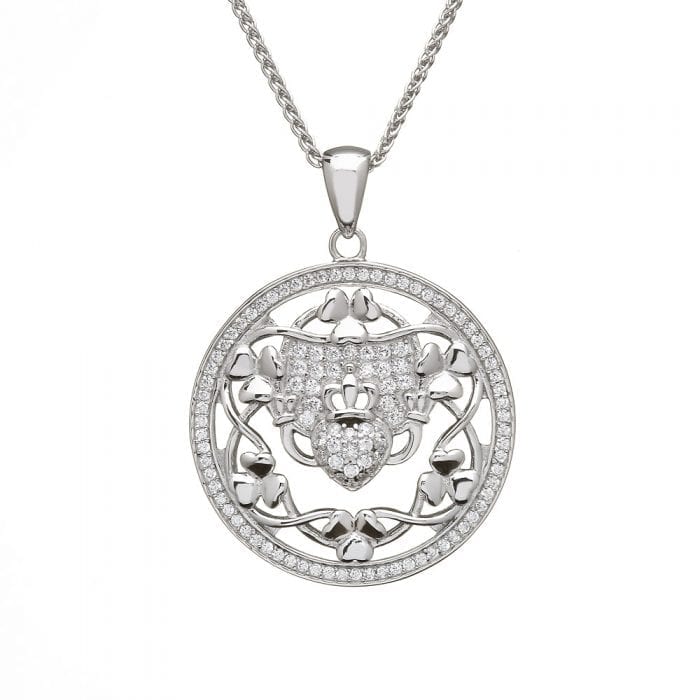 1This Claddagh & Shamrock Silver Pendant is a beautiful mix of Celtic heritage.

1This Claddagh & Shamrock Silver Pendant is a beautiful mix of Celtic heritage. Inside the pendant we have six little shamrocks, connecting to a Claddagh heart in the centre. The outline of the pendant and the heart of the Claddagh are covered in clear Cubic Zirconia stones.

The Claddagh is one of the most popular symbols in Irish jewelry. Legend has it that Richard Joyce, a Galway native, was captured and sold to slavery in North Africa. However, Joyce found himself slave to a Turkish silversmith, and from his master he learned and excelled at the craft.

He was released after 14 years and returned to Galway where his sweetheart awaited him. But while in captivity, he had made what we now know as the Claddagh Ring especially for her. The heart symbolizes love, the hand’s friendship and the crown loyalty.

The name ‘shamrock’ comes from the Irish name “seamrog” or little clover. The “dear little shamrock” has been a symbol of Ireland since the 18th century.

The symbol of the three-leaf clover also receives some legal protection, under the Trade Marks Act 1996 by the government of Ireland. The use of the Shamrock symbol is restricted to goods or services of Irish origin. And only the Minister of Trade, Enterprise and Initiative in Ireland can approve applications to use it.

Also, according to legend, St Patrick used the plant to as a metaphor to illustrate the Christian concept of the Trinity. This was the God the Father, God the Son, and God the Holy Spirit.

We also have plenty of Claddagh earrings that would match this Claddagh & Shamrock Silver Pendant Perfectly. This pendant is a great gift idea for a fiend or loved one.