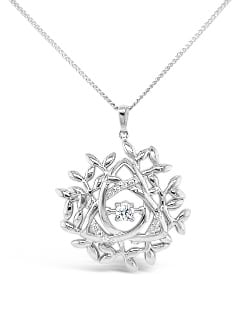 This Trinity & Celtic Spiral Pendant is the perfect combination of Celtic symbols.

Celtic knots come in a variety of designs. This iconic Celtic Knot Trinity Pendant is inspired from our illuminated manuscripts such as The Book of Kells and also Celtic crosses and stones all around Ireland.

The Celtic Trinity knot is also called the “Triquetra” which is Latin for a three-cornered shape. It’s the most well know Celtic knot and has been adopted from ancient Celtic art by Christianity as a symbol to represent the Holy Trinity.

However, to the Celts it meant many things. This included the mind, body, spirit; earth, sea and sky and beginning, middle and end. Therefore representing continuity. The trinity knot also symbolizes life, death, and rebirth.

Celtic spiral symbols like this, features in both ancient and modern Celtic art. It evokes the Celtic interpretation of the three realms of material existence: earth, water, and sky. The symbol also portrays the three Celtic worlds: the spiritual world, the present world and the celestial world.